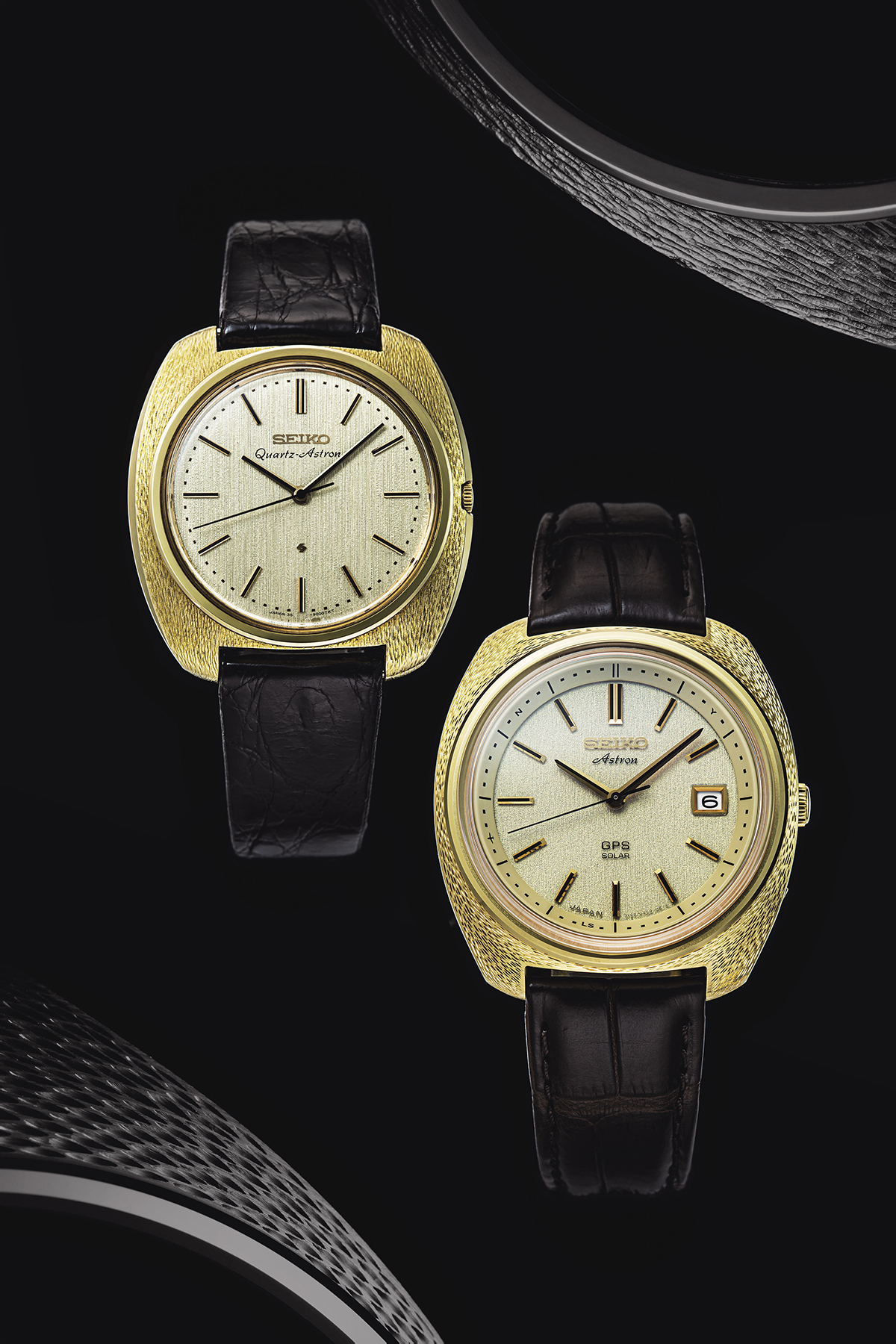 Turning Point for the Seiko Astron

Seiko gave the famous name Astron to the world’s first GPS watch, which was released in 2012. While there was no direct connection between the original Astron, the quartz watch that changed the world, and the new GPS solar watch, their aims were the same, namely to revolutionize the conventional horology of the day. To emphasize this aim, the 1969 Astron’s design is re-created today, 50 years on.

The world’s first mass production quartz watch was the Seiko Quartz Astron, released on December 25, 1969. Rather than the CMOS IC that became the standard for later quartz movements, its Caliber 35SQ movement adopted a hybrid IC made by fix-mounting 76 transistors and 29 capacitors on a ceramic substrate. 8192Hz (later 16,384Hz). 8 jewels. 18KYG (diameter 35 mm). 450,000 yen at time of release.

The Seiko Quartz Astron 35SQ which was released on December 25, 1969 is a watch that revolutionized the concept of timekeeping. It would not be too much of a hyperbole to say that it was thanks to the Quartz Astron that all mankind gained equal access to accurate time. It was the world’s first mass production wristwatch equipped with a quartz movement. Inheriting its famous name is the Seiko Astron, a GPS solar watch. This watch was likewise the first of its kind, using GPS satellite signals to adjust the time automatically. Like the original Astron, its aim was to take horology to a new, higher level.

As it turns out, the path to the “new” Astron was coincidentally same as that of the original. It was an ongoing quest to minimize power use, reduce size, and make the watch easy to use for all. The 7X Series released in 2012 had the kind of large case one would expect with a high function watch. With the creation of the 8X Series in 2014, the size was considerably, while by the time of the 5X Series of 2018, there was no longer any difference in size from an ordinary watch. A further size reduction was achieved with the 3X Series released in 2019, which in no way feels like a GPS solar watch. Just as the quartz watch, typifying advanced-function watches, came to be accepted as the norm, the GPS solar watch, accurate to within one second in 100,000 years, is on the way to becoming the new standard in electronic watches. RW: We cannot denigrate mechanical!

Emblematic of the generation of GPS solar watches is the 1969 Quartz Astron 50th Anniversary Limited Edition with its Caliber 3X22 movement. The design motif is that of the original Astron of 1969. Says Junichi Kamata, who oversaw the Astron design, “Today we look at the first-generation Astron with awe. That’s why I felt maybe we should return to that starting point with the newest Astron.” With the new antenna specifications introduced for the 5X and 3X, the thick bezel covering the large ring antenna of earlier models was no longer needed, enabling the differences in design from ordinary watches to become vanishingly small. For the newest watch, the Seiko design team directly replicated the thin bezel and cushion case that are Astron features.

The small size of the Caliber 3X series movements also made possible a compact Astron for women. “As a result of the movement being made smaller, we could use shorter lugs. We also gave the outer circumference a thinner look by spreading out the cushion case laterally.” Other than the two pushbuttons, there is nothing to suggest that this is a GPS solar watch.

With the 5X and 3X movements, the Astron gained not only a more compact size but a higher feeling of quality. Operating on solar power, the Astron has a polycarbonate face. Bringing out a sense of quality was considered difficult, but Kamata says, “Rather than seeing the polycarbonate as a liability, we took advantage of it to create a layered look.” In addition, the depth of the face has been emphasized, by spraying gold from behind the face in the 35SQ re-creation and in the case of some of the Astron women’s watches by giving the face itself a 3D shape. 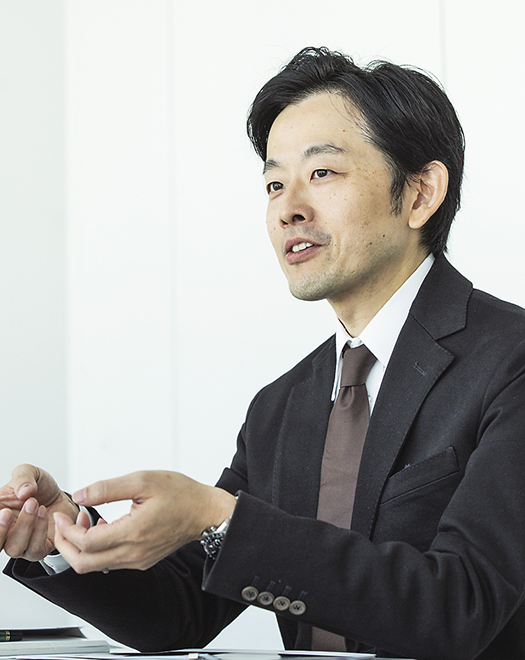 Says Junichi Kamata, who oversaw the Astron styling design, “Shrinking the antenna for the 5X and 3X gave us more design freedom. We decided to take advantage of this by breaking with simple competition over specs to raise the level of the design. By tweaking the shape of the face, we were able to shorten the distance between the hands and face on the models with Caliber 5X.” 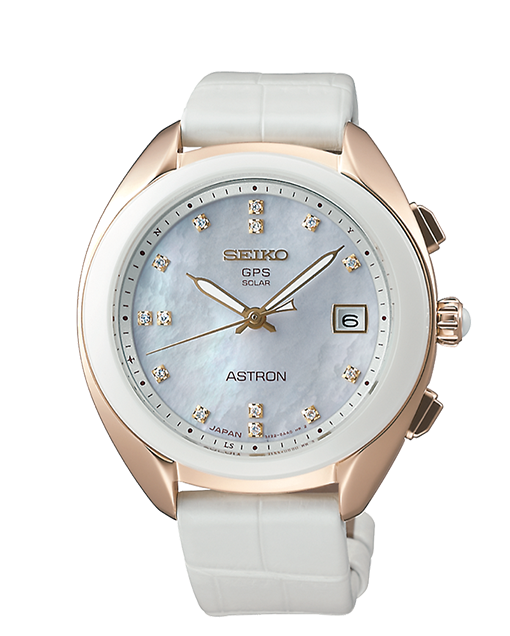 A women’s Astron with the latest Caliber 3X22 movement. By further reductions in the size of the antenna and other parts, the most compact Astron ever was achieved; but the basic functions are similar to those of the 5X. A lever-operated interchangeable strap. A mother-of-pearl face. GPS Solar (Caliber 3X22). Ceramic and SS (diameter 39.8 mm, thickness 12.9 mm). Water resistance 10 bar. 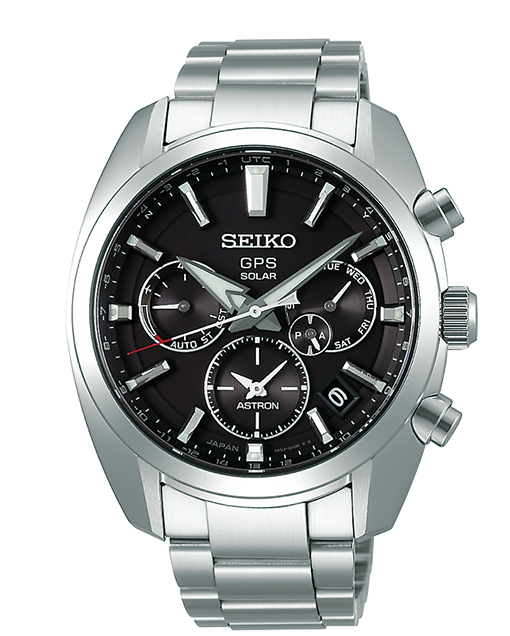 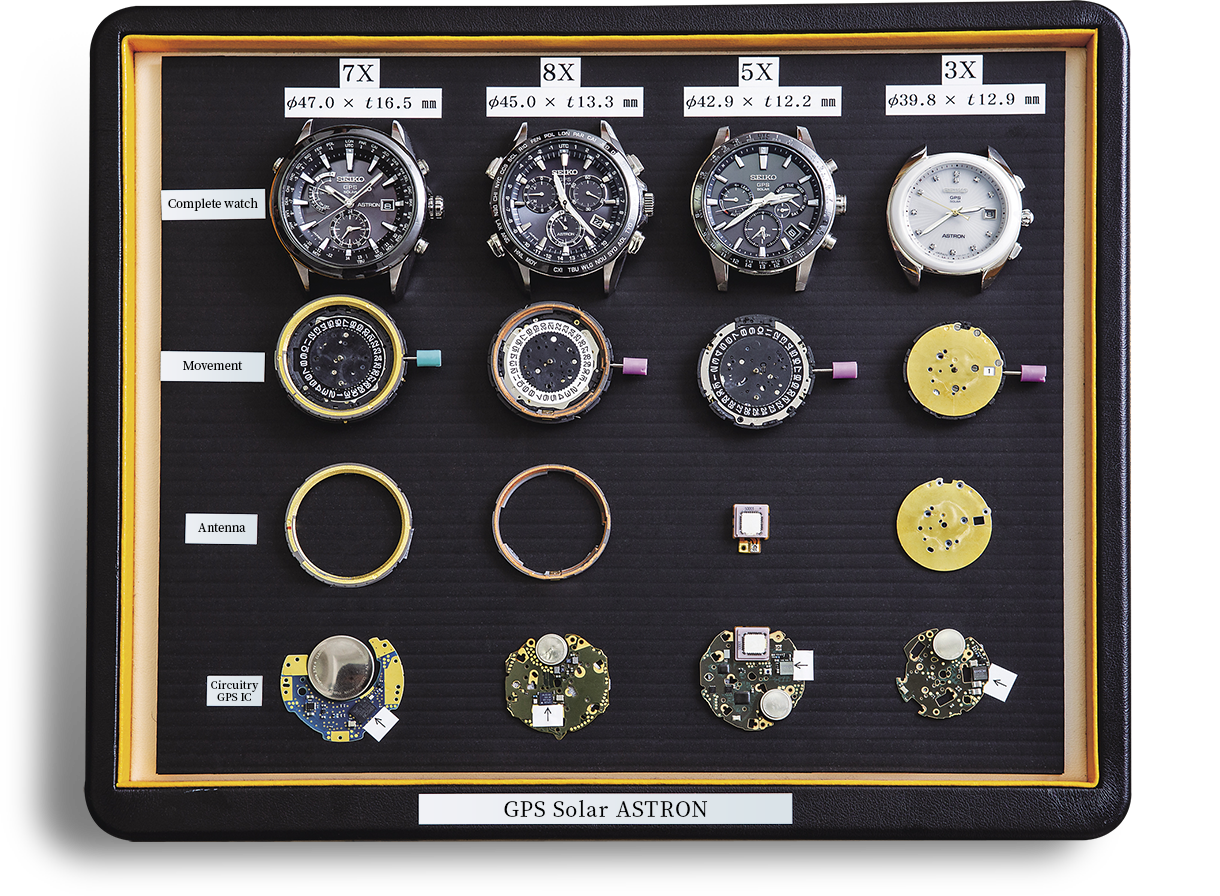 Samples showing the evolution of the Seiko Astron. From left are the 7X (2012), 8X (2014), 5X (2018), and 3X (2019) complete watches, movements, antennas, and GPS IC circuitry. The 3X antenna looks big, but in fact is made on a thin plastic base. In just seven years, the GPS solar watch design has undergone major changes. Thanks to third-generation GPS IC development, even though the watch has become more compact, the reception performance has been improved, giving it 50 percent greater GPS search capability, while reducing power consumption to just a fourth.

One of the dramatic advances is the improvement in the performance of the antenna. The earlier 7X and 8X calibers had a large ring antenna under the bezel, whereas the 5X uses a small patch antenna; and with the 3X, the antenna itself has been integrated with the bridge into one thin plate. Shuichi Tamura, who designed the movement, explains, “The new GPS IC on the 5X and 3X features improved reception performance. This did away with the need to use a ring antenna with high reception sensitivity. At the same time, power use for GPS reception was reduced to half that of the 8X.” Lower power consumption means the transmissivity of the face can be reduced, for a greater quality look.

Another benefit of eliminating the ring antenna is a smaller case along with a broader face. The 8X face was 28 mm, while the 5X is 30 mm and even the compact 3X is 27 mm. Moreover, minimizing the height of the bezel made it possible to close up the space between the watch glass and hands considerably. “Use of a ring around the face to hold the face in place is the same as in earlier models. Since the 8X, however, the gap between the two has been closed up. Because we wanted to retain a three-dimensional feeling, however, the indexes of the 5X are imbedded in the dial ring, which is beveled.”

The Seiko Epson watchmakers involved in development of the Caliber 5X and 3X Series. From right are Shuichi Tamura in charge of movement design, Atsushi Kobayashi who oversaw the exterior design, and Yoshio Mishima involved in exterior design from the 8X and after.
“I believe the 5X was designed with the typical Japanese wrist in mind. At the same time, it carried on with the previous three-dimensional design.” (Kobayashi)
“What’s difficult in the Astron exterior design is making sure reception sensitivity does not decline.” (Mishima)

Along with the smaller antenna size came more functions, as well. “Thanks to the freed-up space, we were able to mount separate motors for the seconds, minutes, and hours.” As a result, the Astron came to have wider, long hands, not what one would expect on a quartz watch. “The two battery cells in the watch are originals, which have become even thinner in the 3X. They are much smaller than those of other makers. This combination of factors is why the Astron was able to become both compact and full of diverse functions.”

The ideal aimed for in the original Astron was to bring accurate time to everyone. Fifty years later, through the course of the quartz revolution, this ideal, and a great deal more, is being accomplished in the new Astron.
“It’s a watch that doesn’t make a show of all the advanced functionality inside.” (Kamata)
By no means is it coincidental that this GPS solar watch was given the name Astron. 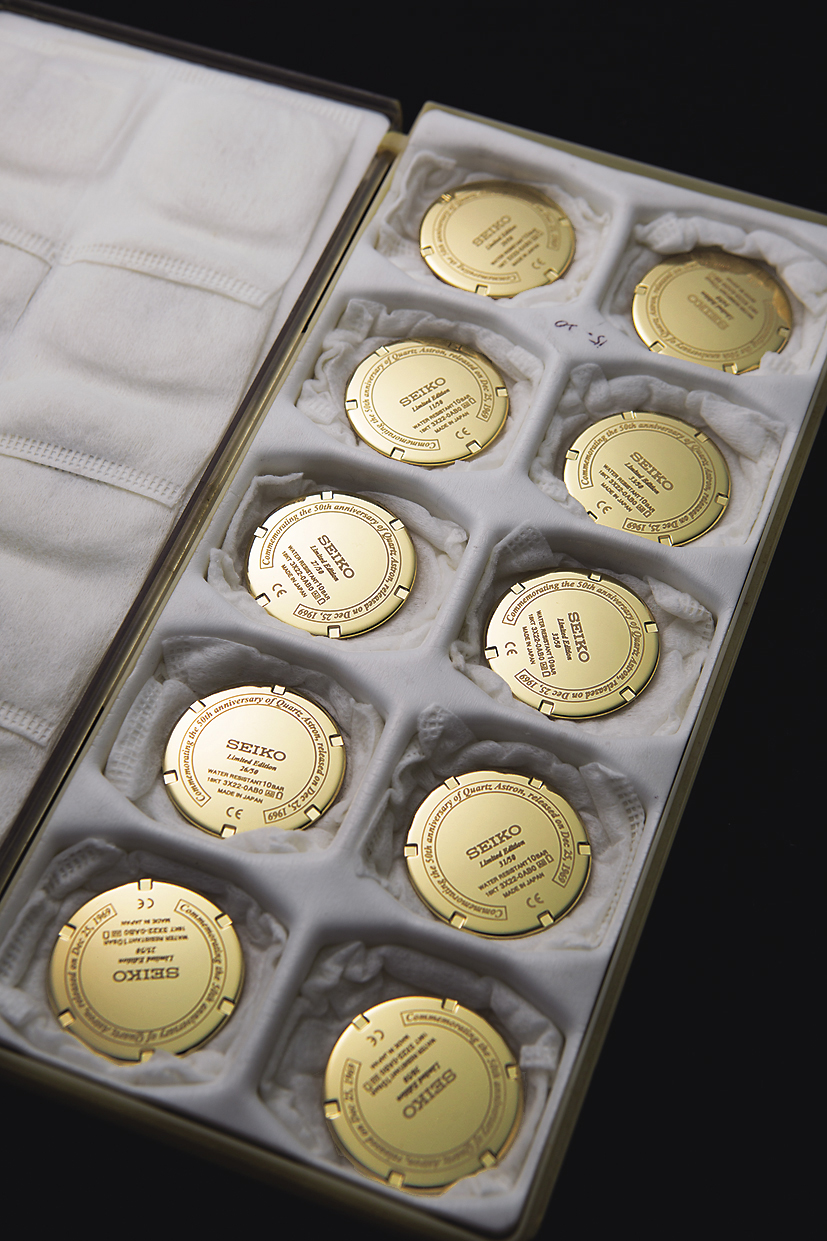 The case back of the 1969 Quartz Astron 50th Anniversary Limited Edition after polishing. Typical of a Seiko high-class product, the case has a perfect mirror surface. 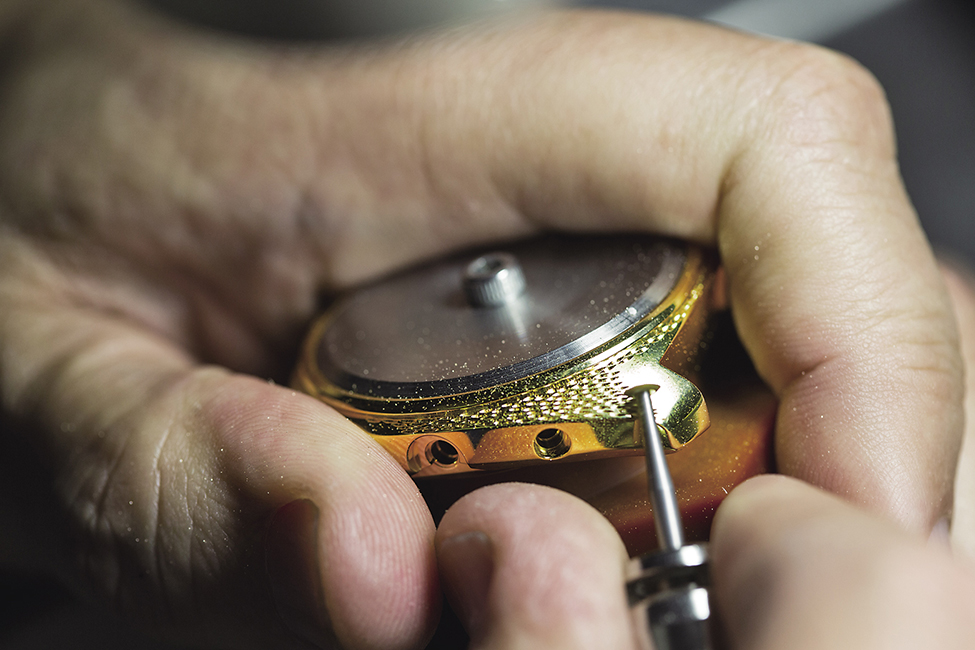 Pattern engraving. A steel cutter rotating at high speed is applied to the case, engraving a deep pattern. As the jig holding the case, one used for clamping diamonds or other stones has been used. This kind of knowhow is unique to a jewelry studio. 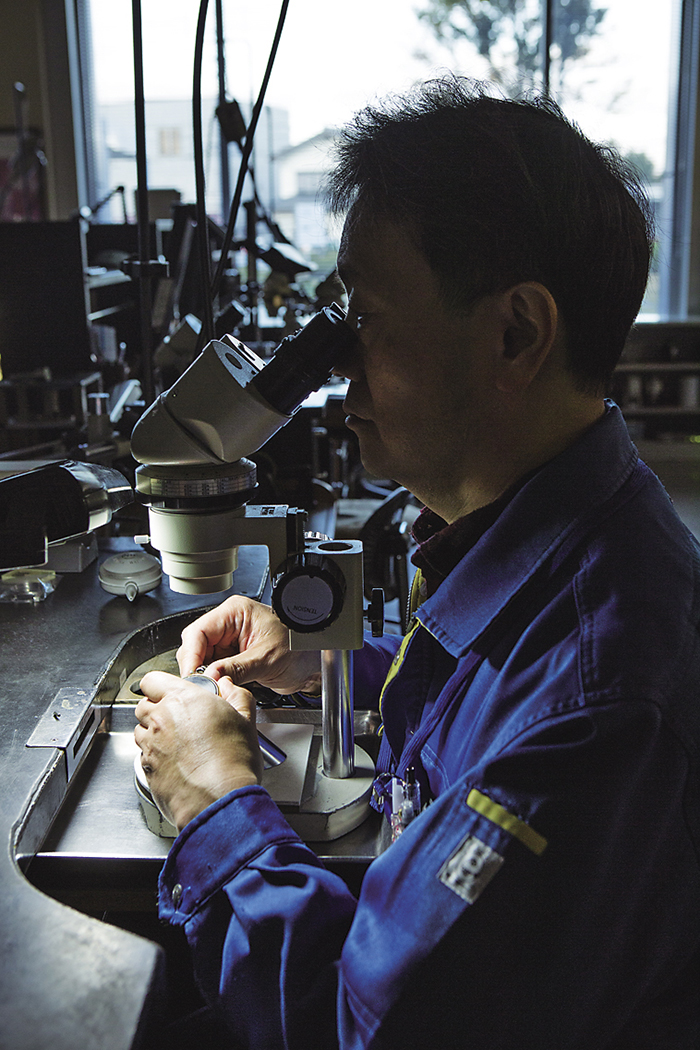 Seiko Epson has a jewelry division that mainly makes Credor luxury dress watches. Working in this division, Kiyoshi Sato is shown engraving the pattern on the 1969 Quartz Astron 50th Anniversary Limited Edition 18K Gold yellow gold case. “I learned this finishing technique directly from my senior colleagues who were involved in trial production of the 35SQ reproduction edition. The patterns are different, but the method itself is the same as 50 years ago.” 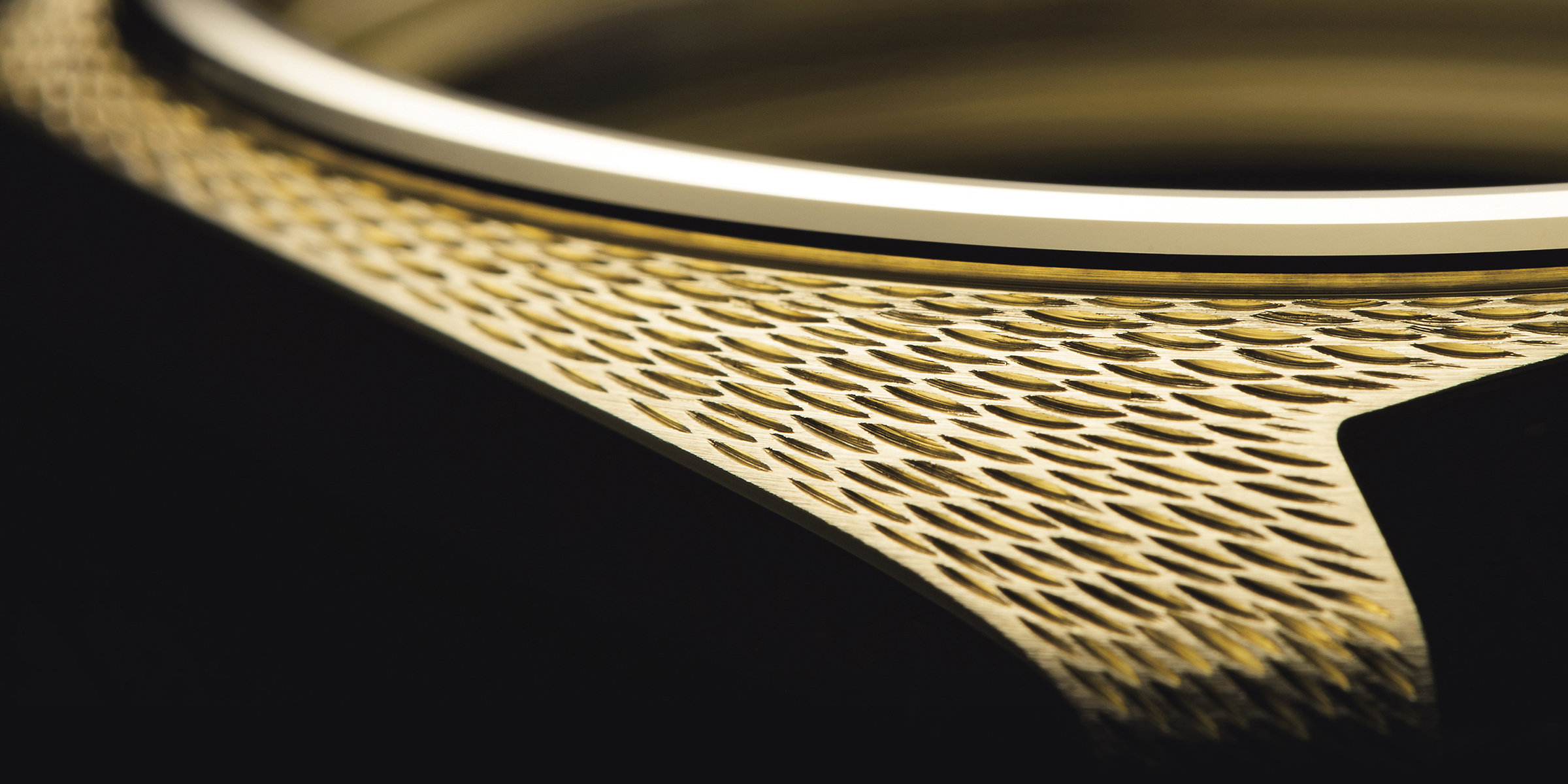 The yellow gold case of the “1969 Quartz Astron 50th Anniversary Limited Edition Model 18K Gold” as finally finished. Each indent in the deeply engraved pattern was created by hand, one by one, using a 1 mm cutter. The movement is inserted from the front side for higher reception sensitivity. This also has the benefit of making the case side look thinner.