The remarkable achievement of the Seiko Quartz Astron lives on.

It is, without doubt, no exaggeration to say that the Seiko Quartz Astron, released December 25, 1969, was a wristwatch that changed the world.
With 100 times the accuracy of a standard mechanical watch, it was the watch that began the democratization of the quartz movement that would eventually bring accurate timekeeping within the reach of all.
Four decades on, in 2012, a new watch bearing the Astron name went beyond high accuracy, to make ultra-high accuracy across time zones an everyday reality. 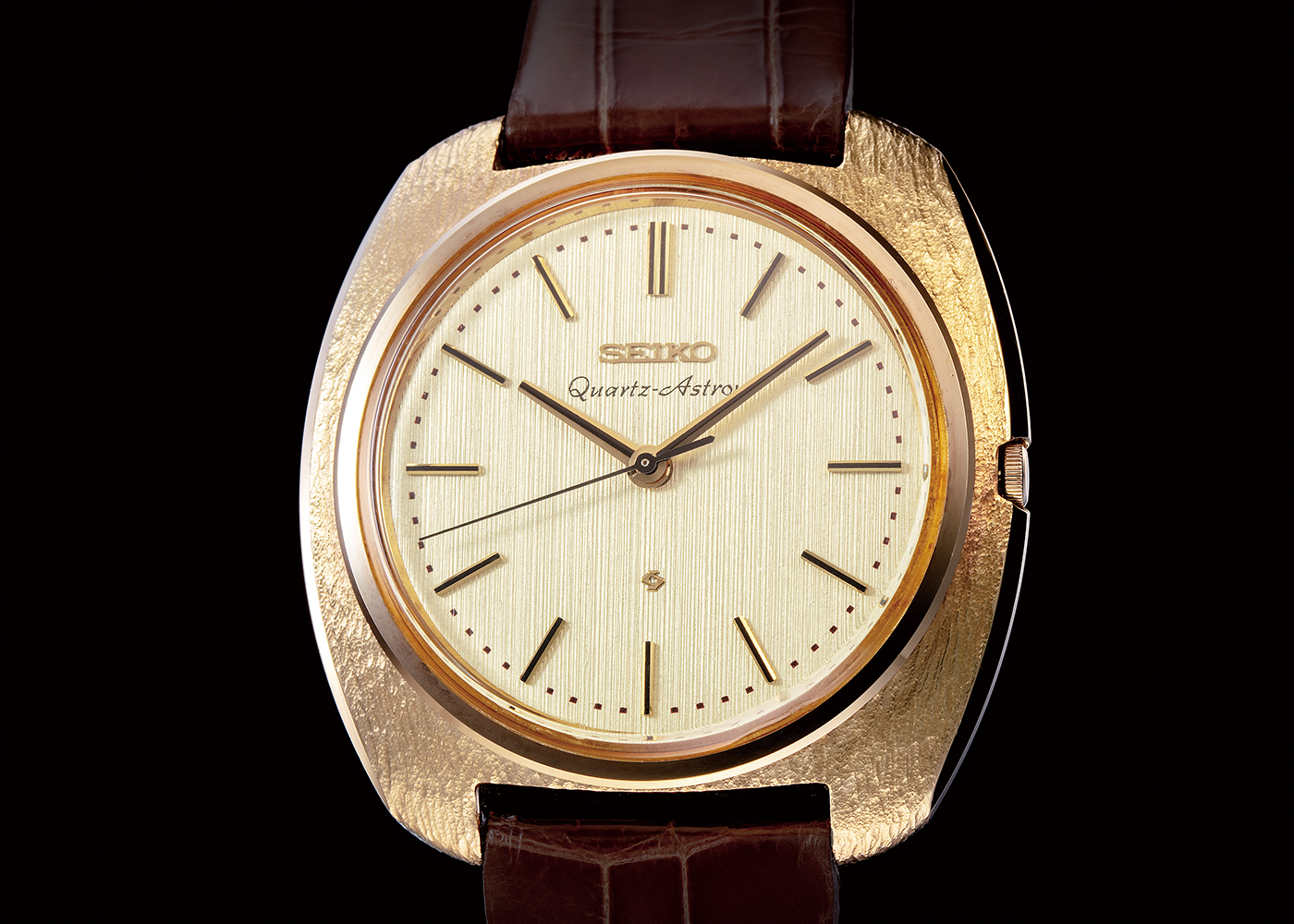 The watch that triggered the Quartz Revolution. The Astron 35SQ was the world’s first quartz wristwatch in the world and it changed the watch industry for ever. The unique design was by Kazunari Sasaki of Suwa Seikosha. The Quartz Astron went on sale December 25, 1969. Quartz (Calibre 35SQ, diameter 30 mm, thickness 5.3 mm). 8192 Hz. 18KYG (diameter 36 mm, thickness 11 mm). The price was 450,000 yen. It should be noted that Astron was registered as a trademark only in Japan and so there are some versions without the Astron name on the dial.

Governing a watch’s accuracy is the oscillator. That accuracy is improved the more the oscillation frequency is raised had been known since the time of Abraham-Louis Breguet. In the 1950s, some watchmakers had been able to dramatically improve the normal usage accuracy of wristwatches by adopting this approach. As long as a watch had heavy parts such as the balance wheel, however, further improvement was difficult. Watchmakers thus turned their attention to a technology that runs a current through a quartz crystal to control the accuracy of its oscillations. They saw that, theoretically, using a small crystal, it should be possible to raise the number of oscillations to several thousand times more than a mechanical watch.

In 1959, Suwa Seikosha (the current Seiko Epson) and an affiliate of K. Hattori& Co. (today, Seiko Watch Corporation) set about developing a quartz movement running on a 1.5V battery. Eventually the prospect of mass production came into view, as the company devised a method of forming the crystal oscillator by hydrofluoric acid using a photo-lithography technique, while suspending the oscillator in a vacuum capsule to protect it from shock and controlling the effects of temperature changes by means of a newly developed thermo-variable condenser.

In 1963, Seiko introduced the Crystal Chronometer, a quartz-controlled table-top clock. The following year, Seiko dominated the quartz deck chronometer category at the Neuchâtel Observatory competition, winning the 2nd to 7th place awards. Next, the company aimed to make this technology smaller. The quartz pocket watches entered in the Neuchâtel Observatory competition won the 2nd to 5th place awards in 1966 and 1st to 5th places in 1967.

An article in the New York Times of January 5, 1970, under the headline, “Accuracy Stressed For Crystal Device In Japanese Watch,” introduced the Seiko Quartz Astron. Interviewed for the article, K. Hattori’s President Reijiro Hattori noted that about 100 of the watches had been sold before the end of 1969 and announced that the company was planning to introduce the new watch to the United States.

The issues with quartz crystals had been overcome, but high hurdles remained on the way to greater compactness. The motor that turns the quartz oscillations into hand rotation was big, both in size and power consumption. Suwa Seikosha devised a distributed arrangement for the rotor and stator of the motor to save space. For the motor coil, made of 20µm copper wire wound 20,000 times, a six-pole stepper motor was developed that rotates the motor 60 degrees at a time by means of one electrical pulse per second. The result was a smaller motor with total consumed current of only 18µA.

In 1968, K. Hattori’s President, Shoji Hattori, seeing the development progress, shut down the tuning fork watch project that had been going on in parallel and told his team that he wanted them to achieve the commercial release of a quartz watch within one year. The development team, led by Tsuneya Nakamura, managed at last to create 20 watches by December 1969. The name given to the watch was Astron. Shoji Hattori chose a name that resonated with the language of the ‘space age’ for the world’s first mass production quartz-controlled wristwatch.

In the ten years that followed the creation of the Quartz Astron, its technology transformed people’s concept of time, eventually paving the way to the development of digital devices. Promoted under the headline, “Someday, all watches will be made this way” the Seiko Quartz Astron’s successors changed the horological world.

The History of Quartz Watch Development

The second generation Seiko Astron is a GPS solar wristwatch that was released in 2012.
While the new Astron has functions and capabilities that far exceed those of its 1969 predecessor, the name Astron was chosen to demonstrate the importance of the GPS Solar technology that it contained and to highlight its high accuracy which was just as revolutionary as that of the first Quartz Astron. 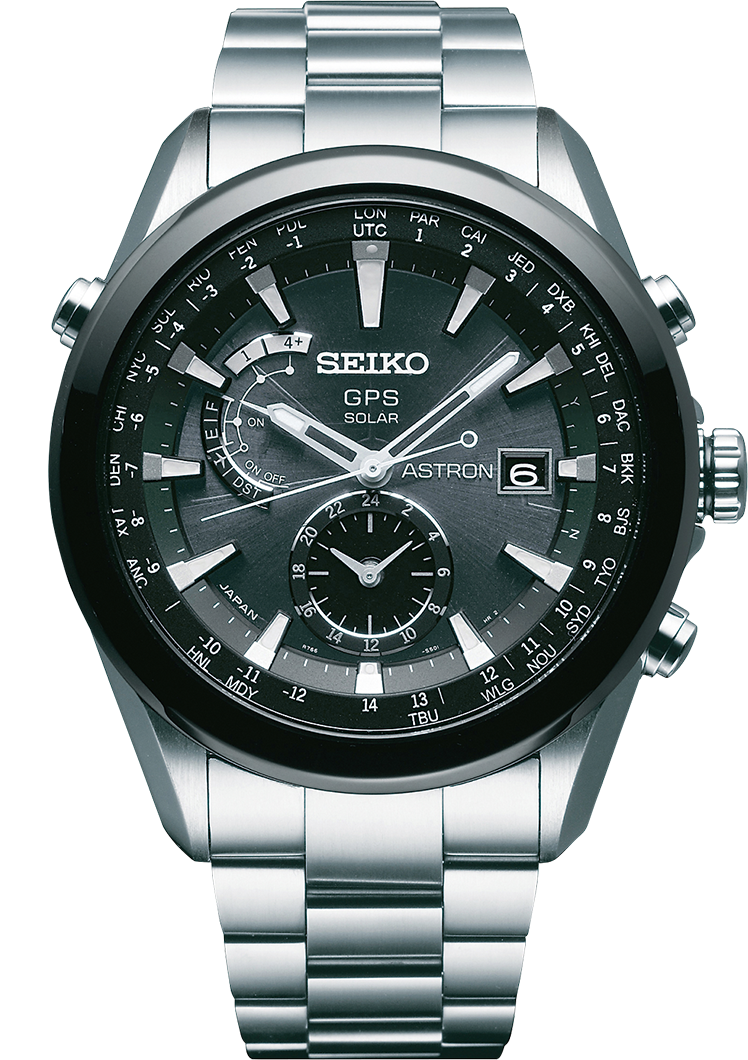 What technologies were researched before this level of accuracy was achieved? One was the radio-controlled watch. In 2004, Seiko released a radio-controlled timepiece, adjusting the time based on standard time signals. In theory, a radio-controlled watch using an atomic clock as its reference should have outstanding accuracy; but Seiko was also aware of the limitations of this approach. Since there are only four countries in the world sending out standard time signals, it may not be possible to obtain the accurate time in countries beyond the reach of these signals.

The company then set out to develop a watch that could achieve accuracy anywhere in the world. The focus of these efforts was on a satellite watch synchronizing to time signals received from GPS satellites rather than using standard time signals transmitted from earth stations. Seiko Epson had already developed equipment for determining location by GPS, but incorporating this functionality in a wristwatch was seemingly impossible. The power consumption when receiving signals from a GPS satellite was around 200 times that of a radio-controlled watch; moreover, a huge antenna was necessary for accurate reception. Incorporating such functionality inside a wristwatch would require further downsizing and power saving. The challenge was exactly the same as that faced by the team that made the original Astron.

Just as a number of technical innovations made possible the first Astron, three elements enabled development of the satellite watch.

The first way that the compact size of the Seiko Astron was achieved was thanks to antenna improvements. The antenna in the 7X Series of 2012 was 38 mm in diameter, which became 35.5 mm with the 8X Series of 2014, then 10×10 mm with release of the 5X Series in 2018. The antenna of the 3X Series in 2019 was dispersed across the entire face, so that the presence of an antenna was no longer evident. From the 2012 7X Series to the latest 5X/3X Series, power consumption was reduced to around one fourth, while reception performance was improved 1.5 times. As a result, along with the much more compact size, it became possible to incorporate a super smart sensor capable of receiving GPS satellite signals up to twice a day.

With a compact ring antenna for receiving signals and ultra-power-saving GPS module, it has the look of a completely normal wristwatch as well as excellent signal reception. In 2012, Seiko succeeded in launching the world’s first production GPS solar wristwatch. And the name it chose for this watch was Astron. While the functionality of the GPS Solar Astron far exceeds that of the 1969 original, the two are very much alike, in being the results of continuous drives to reduce size and power consumption and in achieving new standards of accuracy.

The first of the new Astron watches, the 7X Series, that was released in 2012, had an appearance like no other, to emphasize the uniqueness of its technology. The 8X Series of 2014, however, had a smaller outer diameter and had a more mainstream appearance. The 5X Series, launched in 2018, went further still with its exterior look showing no sign of the high functionality within. What’s more, when synchronizing, it receives time signals in just 3 seconds. The new Astron followed a path of continuous enhancement similar to that of its predecessor. The outcome of this journey at the present point in time is the new 3X Series released in 2019. As the world’s first women’s GPS solar watch, it no longer has even a single aspect in its exterior design that reveals its extraordinary functionality.

Just as the quartz watch advanced to the point where high accuracy became taken for granted, today’s Astron has made ultra-high accuracy across time zones an everyday reality. What the new Astron has brought about is truly a “Second Revolution.” 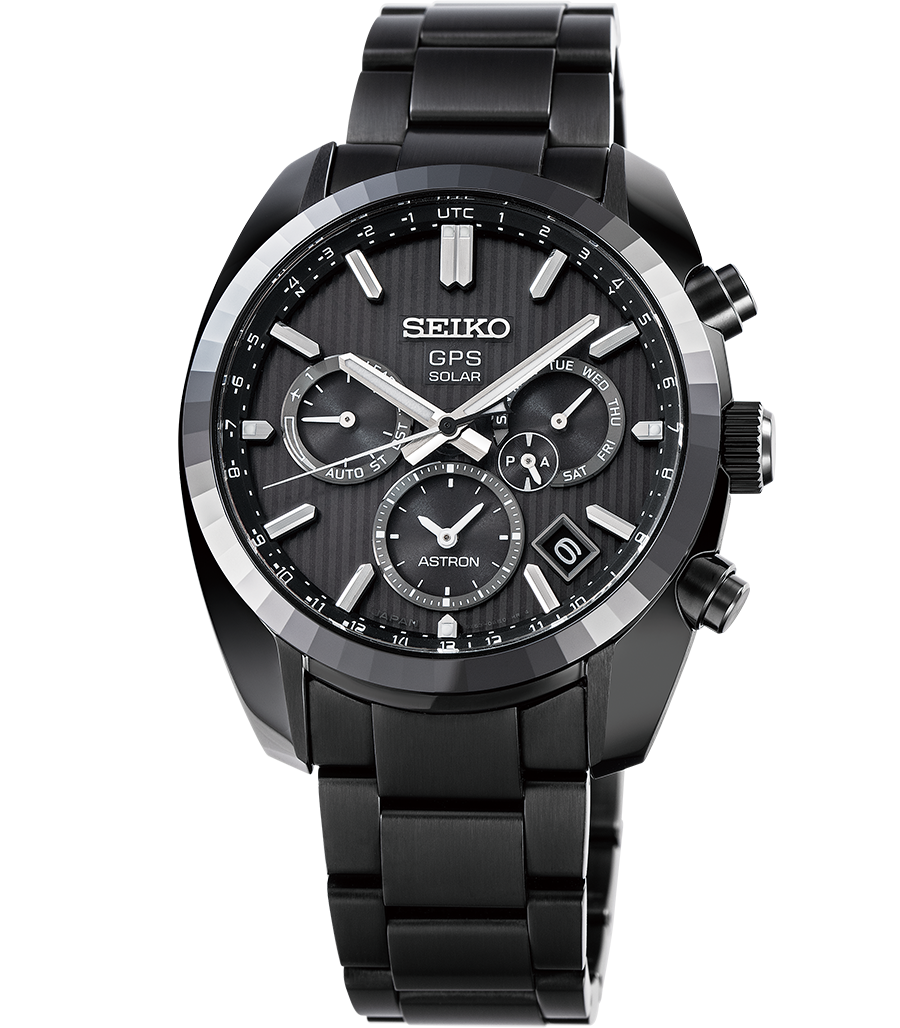 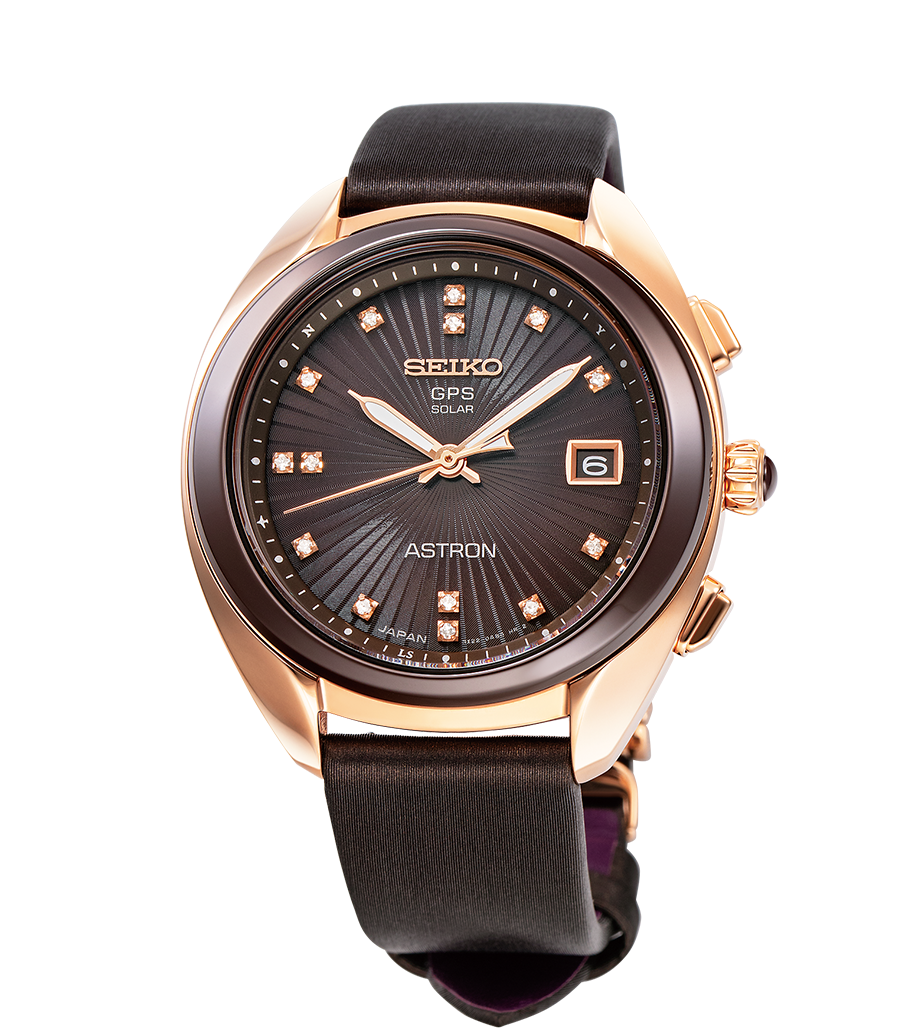 An Astron GPS Solar designed expressly for women. Its basic functions are the same as the 5X Series. The correct time is maintained by automatically receiving GPS satellite signals up to twice a day. Despite its slim size, the power reserve is as long as the 5X Series. It also comes with a lever-operated interchangeable strap. GPS solar quartz (Calibre 3X22). Ceramic and SS (diameter 39.8 mm, thickness 12.9 mm). Water resistance 10 bar. Japan domestic model.